To share your memory on the wall of Derek Burrage, sign in using one of the following options:

After living with dementia for 9 years and suffering a stroke 11 months ago, Derek succumbed to the Novel Coronavirus peacefully in his sleep on Tuesday, April 7, 2020, in his 87th. Left behind to mourn his loss i... Read More
Burrage, Derek John.

After living with dementia for 9 years and suffering a stroke 11 months ago, Derek succumbed to the Novel Coronavirus peacefully in his sleep on Tuesday, April 7, 2020, in his 87th. Left behind to mourn his loss is his soulmate, lover, best friend and wife for over 41 years, Carolyn (Barry, nee Joy). Father of Lynn (the late Gerard) Brennan, Paul Burrage and Daryl Burrage. Best stepdad of Michelle Lambrianou (Frank Winkle), Robert Barry (Sharon Ellis) and Richard Barry (Michelle). Loving grandfather of Theresa, Nicole, Hayley, Danielle, Alyssa, Lauren, Darby, Luke, Declyn, Robert, Michael, Matthew, Carlie, Paul-Michael, MacKenzy, Madison and Ryan. Great grandfather of Taylor, Jordyn, Camryn and Alix. In a few weeks he will have a great grandson. Extra special close friend to Juergen Kuehnen (Pam). They spent countless hours discussing aeroplanes and numerous other topics. He has a niece Shelley in South Africa. Predeceased by his sister, Peggy. He will be missed by several relatives in England who all came to visit him when we went to England in 2017. Derek was born in Southampton, England. He experienced WWII from the ages of six to twelve. For a young boy, the war was very exciting. He stated he had a very mean mother because when the planes flew overhead dropping bombs, they had to go into the coal cellar when he just wanted to watch the planes. He joined the R.A.F. later in life so ”the Queen could pay him to fly aeroplanes.” In 1957 he immigrated to Canada and worked on the famous AVRO Arrow. He had a wonderful life and always thoroughly enjoyed all his family and friends. The family extends a special THANK YOU to all the staff at Anson Place and the Hagersville Hospital for their wonderful compassion and care during the last few months of Derek's life. A celebration of Derek's life will be held when we are able. Details will be announced on the COOPER FUNERAL HOME, Jarvis (519-587-4414) website when they are available. If desired, donations to the Alzheimer's Society, Hagersville Branch, No. 6 RCAF Dunnville Museum, your local SPCA or a charity of your choice would be appreciated. Friends are invited to send condolences and sign the Book of Memories at www.cooperfuneralhome.ca

To the love of my life: I KNOW YOU ARE ENJOYING YOURSELF FLYING THROUGH THE WHITE FLUFFY CLOUDS UP IN THE SKY IN YOUR CHIPMUNK.
Read Less

Receive notifications about information and event scheduling for Derek

We encourage you to share your most beloved memories of Derek here, so that the family and other loved ones can always see it. You can upload cherished photographs, or share your favorite stories, and can even comment on those shared by others.

Posted Apr 29, 2020 at 03:29pm
My deepest heartfelt sympathies to you Carolyn and your family.
I will always remember Derek as a "matter of fact" fun guy who always just knew how to play every game at our memories in motion gatherings. He always seemed to win!
The love you both had for each other is a reminder of the vowes we take and is a testament to all.
Love,
Trish
Comment Share
Share via:

Posted Apr 29, 2020 at 02:24pm
Will miss Derek and his fabulous paintings. Will miss the fun times that we shared at the HAC. you were a good man and will be missed by many. Condolences to Carolyn and the rest of your family. Rip my friend
Comment Share
Share via:
B

Posted Apr 21, 2020 at 01:03pm
Carolyn, it has been many years since we have seen each other but we were saddened to hear of Derek's passing. You and your family are in our thoughts during this difficult time.

Posted Apr 15, 2020 at 09:16am
Dear Carolyn and Family,
We were so sorry to hear that Dereck passed away last week. The last few years have been difficult. He had a full and very interesting life filled with his many passions - for flying, a love for sport cars, RCAF #6 Museum, family and friends, to name a few. He was very creative and did a lot for the RCAF #6 Museum. We will always be grateful. We send our thoughts, hopes and prayers to bring you and the family comfort during this very trying and heart breaking times. Take care and stay well.
Lynne and Charlie King
Comment Share
Share via: 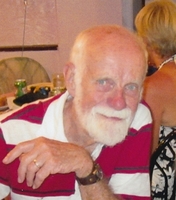