To share your memory on the wall of Elson Reu, sign in using one of the following options:

Peacefully at Anson Place Care Centre, Hagersville on Wednesday, April 8, 2020. Elson Reu of Jarvis in his 93rd year. Elson was the beloved husband of Betty (nee Peart) for almost 67 years. Son of the late George and Mable (nee Pridmore) Reu. Loving father of Debra (1959), Carolyn (Donald) Hewitt, Doris, Jean (Loring) Tupper, Peggy (Bryan) Webber, Gail (Joseph) Varga and Gerald (Suzanne). Grandpa of Jonathan (Amara), Meghan, Catherine, Christine, Graham (Shivonne), Emily, Anne, Claire (Brad), Madeline, Tyler, Katelyn, Neil (Veronica) and Alison. Great Grandpa of Phoenix, Gwenevere, Austin, Kendra and Nelson. Elson was the brother of Leonard (the late Donelda) and Freda (Jack) Hodgson. Also survived by many nieces and nephews. Elson was a life-long, contributing resident of Jarvis. He began working as a carpenter with his father when he was 16. His brother, Leonard, joined them shortly thereafter and over a lengthy career, they were together responsible for building many homes in Jarvis and the surrounding area. Elson was a member of the Jarvis Fire Department for over 25 years and devoted member of the Wesley United Church in Jarvis. At Elson's request, cremation has taken place and there will be no public funeral service. A private family service will take place at a later date. If desired, donations to Wesley United Church or the charity of your choice would be appreciated by the family. Funeral arrangements entrusted to COOPER FUNERAL HOME, Jarvis (519-587-4414). Friends are invited to sign the Book of Memories at www. cooperfuneralhome.ca
Read Less

Receive notifications about information and event scheduling for Elson

There are no events scheduled. You can still show your support by sending flowers directly to the family, or planting a memorial tree in memory of Elson Earl Reu.
Plant a Tree

Donations are being accepted for: JARVIS PASTORAL CHARGE.

We encourage you to share your most beloved memories of Elson here, so that the family and other loved ones can always see it. You can upload cherished photographs, or share your favorite stories, and can even comment on those shared by others.

Posted Jun 30, 2020 at 11:20pm
my grandpa Elson Reu felt like a dad to me he was the nicest person i was very sad when he died.He is not suffering anymore i know he will be doing grate in heaven. There will forever be a hole in my heart ;c i a missing him right know.
Comment Share
Share via:
CR

Posted Apr 19, 2020 at 12:28pm
Thinking of one of the nicest & kindness men in Jarvis. You could always ask him anything and he would give you that kind smile & say what can I do to help you. All my past 50 years in Jarvis , Betty & Elson were always the same showing their happiness in life at their own pace. The swing out front I always thought suited them well. I send my love to Betty & all the family and pray for peace in your hearts as you move forward . RIP Elson. You have earned your rest. Sincerely, Carleen Rushton
Comment Share
Share via:
PV

Posted Apr 15, 2020 at 02:03pm
Dear Betty and family, please know that we are thinking of all of you during this difficult time. We remember the times our families joined together, and may all of your memories give you comfort. With caring thoughts, Peter & Ann Varga

Posted Apr 12, 2020 at 11:48am
Dearest Betty, Carolyn, Doris, Jean, Peggy, Gail, Gerald and families, I am deeply saddened to hear about Elson. It is never easy to say goodbye to someone who means so much to us and I share in your sadness today as you remember how special he was to all of you. I know that he was a wonderful person who loved, and was loved by a lot of people, including myself and I will always remember how I became one of his own whenever Gerald and I, and a host of other kids from the neighbourhood were playing at your house all those years ago. It never seemed to bother him as long as we weren't destroying stuff, or causing too big of a disturbance in the neighbourhood but that we were simply growing up and that the world had so many things for us to dicover. I also liked how he would share some of his wisdom about growing up as well along the way. Kind of like that teacher who knew a lot and who tried to share it with everyone in spite of our resistance at times to hearing it. I knew from the beginning that I was always welcomed at your house, to eat at your table, and sleep over in your basement, or to camp out in the backyard with Gerald in that little pup tent that he had. This is what I will remember about him most fondly, especially when the days of our youth had gone but we always had a great chuckle remembering them afterwards whenever our paths crossed. Too many loving memories to share but never too much love. There was always room for more and he shared it freely and openly all as you know. I wish for everyone the greatest of loving memories about him, and that he continues to be that special person in your hearts who will always be there when you need him the most. My love and prayers to all of you.
Sincerely,
Paul Doughty and Family.
Comment Share
Share via:
GR

Thank you Paul. I appreciate your comments and grinned the whole time I was reading your post. A visit is due when we get the all clear.
L

So sorry to hear of Elson’s passing. He was a long time member of the church and his fine art of building and craftsmanship will be remembered. We admire his work of the cabinet he built for the sound system weekly. Thinking of you all now and the days ahead as you travel this difficult road. 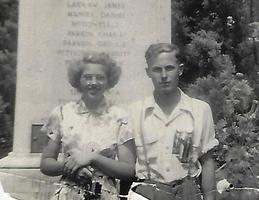 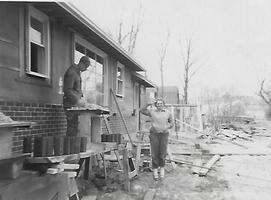 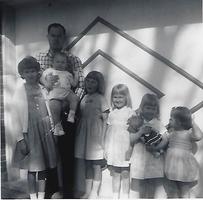