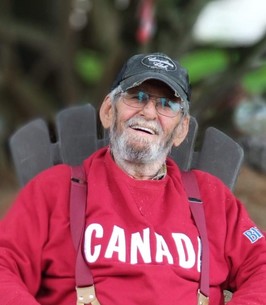 Kurt was born in Switzerland and when he was 21 years old, with only a few dollars in his pocket, no English and as a trained electrician, he took a boat from Rotterdam to Montreal. Little did he know his future wife had taken exactly the same boat a month before. They met at the German Beer Gardens in Montreal. When he asked her to dance, she said no but three months later he married her. Never one to wait too long, he became a father to Andrea Droesch Buechler in 1971 and to Stephan Buechler in 1972. Then it was off to work in Africa and Saudi Arabia, traveling extensively in Asia and taking his family with him on his adventures. He always called Canada his home and bought a piece of land in Port Dover. In 1984, he built his dream house there and decided to settle.
He was a hard worker and taught his children to be the same. To this day, his daughter has never forgotten raking the long laneway nor the disinfecting of chick bums with ointment in the middle of winter. He would later continue his career as an engineer, traveling to places such as Chile, Island and Iran. He had a mischievous sense of humour and even convinced a friend once that he was breeding a special kind of chicken when, in fact, it was just a molting chicken with practically no feathers. This sense of humour stayed with him until almost to the very end.
He is loved and will be deeply missed.

In keeping with Kurt's wishes, a private family memorial will take place following cremation. If desired, donations to the Jarvis Caring Cupboard Food Bank or Simcoe Salvation Army Community and Family Services would be appreciated by the family.

All rights reserved. This obituary is also archived at obittree.com