To share your memory on the wall of Coyne \"Gus\" Leatherdale, sign in using one of the following options:

Peacefully, at Leisure Living Retirement Home, Jarvis, on Tuesday, May 12, 2020. Coyne Leatherdale, a life-long resident of Jarvis, in his 92nd year. He was predeceased by his special friend and long-tim... Read More
Leatherdale, Donald Coyne "Gus"

Peacefully, at Leisure Living Retirement Home, Jarvis, on Tuesday, May 12, 2020. Coyne Leatherdale, a life-long resident of Jarvis, in his 92nd year. He was predeceased by his special friend and long-time companion, Lorraine Chambers (nee Keith) in 2018. Predeceased by his sister Jean and her husband Alan MacDonald. Uncle of Jane and Don Shirley, Joan and Ian Gibson, Karen and Herm Van Ryn and Ian and Dorothy Macdonald and many great nieces and nephews. He had also been "adopted" into the Chambers family and is survived by Lorraine's children Keith and Marlene Chambers, Wayne and Virginia Chambers, Brian Chambers, Gail and Keith Catherwood, Gwen and Ben Tisdale and Earl Chambers as well as her grandchildren and great grandchildren. The funeral service for Coyne will be held at COOPER FUNERAL HOME, 19 Talbot Street West, Jarvis on Thursday, May 14, 2020 at 11 am. Due to the restrictions on public gatherings due to the COVID-19 pandemic, the service is not open to the public, but will be live-streamed on the Cooper Funeral Home Facebook page. For those unable to watch at that time, the video will also be available to view later on both the Facebook page and the Book of Memories website for Coyne. Interment Wesley United Church Cemetery, Jarvis. Due to the same restrictions, the graveside service will also be available to view in the same manner as the funeral ceremony. Donations to Wesley United Church or the charity of your choice would be appreciated by the family. Friends are invited to send condolences and sign the Book of Memories at www.cooperfuneralhome.ca
Read Less

We encourage you to share your most beloved memories of Coyne "Gus" Leatherdale here, so that the family and other loved ones can always see it. You can upload cherished photographs, or share your favorite stories, and can even comment on those shared by others.

Posted May 15, 2020 at 04:49pm
My sympathy to all of Coynes extended family. When I was was younger I always called him Gus. Lately he was Coyne, as I had come to have more respect for him as a friend and gentleman. When he would meet my sister at Leisure Living he would always ask "how is Gary". Coyne always kept me supplied with used Noodle golf balls. Rest in peace my friend.
Gary Marshall
Comment Share
Share via:
JA

Posted May 14, 2020 at 10:37am
"Donald Leatherdale" brought so many gifts to our life. We will never forget him! May his spirit live on in these trees and his memory remain

Posted May 14, 2020 at 10:33am
Coyne was a gentleman, a golfer, a neighbor, a businessman just to name a few as well as a " preforming artist", we had fun many years ago doing the Lion's Shows! Sympathies to the Leatherdale, Chambers families.
Comment Share
Share via:
MH

Posted May 14, 2020 at 10:33am
Rest in peace friend Coyne you and your family were great to work for in the little store. Huge to you Jim and Maggie Hoover
Comment Share
Share via:
DT

Posted May 14, 2020 at 07:00am
Some patients you remember more than others and Mr. Leatherdale is one of the remembered ones for always having a calm demeanour, pleasant smile and polite manner. And of course I also remember the box of chocolate covered Celebration cookies he never failed to bring to his appointments. My sympathy with respect, Dr. John Thorpe
Comment Share
Share via: 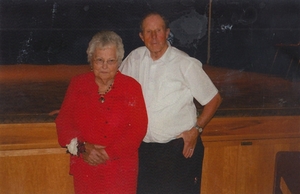